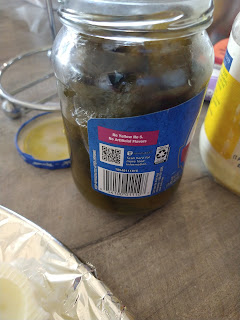 Each year we try to make less so there isn't as much leftover. This year I saw a really good sale on plastic containers $2 for a set of 24 varying sizes, from 4ounces to a half gallon. I purchased enough to pass around to the hostess and guests so that clean up could go quickly and everyone that wanted to take food home would have containers to do so. Somehow, I still ended up with the majority of the leftovers. The deviled eggs started out on a rough note A bit too soupy Boy did the grandkids and great grands grow a lot!  I swear that boy was just a boy last summer! SIL was in a good state for most of the day The great granddaughter didn't sit still long enough to get any good photos, but she has gotten so much taller too. She is the little one jumping off the bar stool. She will be 5 in March, hard to believe! It was a smaller group this year as some of the "adult" grandkids didn't make it. Most did not bring their "plus 1". The ride home for SIL was
Post a Comment
Read more

Twas the night before turkey day... 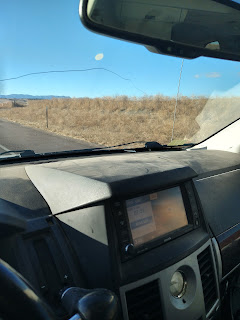 Day 5 of the Thanksgiving break... 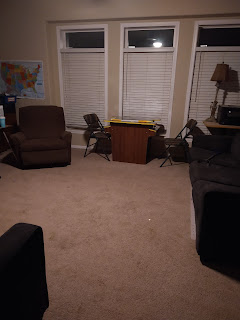 Today we have appointments, dental appointments, I hope to enlist the help of DH. I won't hold my breath. An instruction I pass out frequently, anyone that knows me is aware of this. I hope to continue the work I started yesterday. If I can clear the shelves in the main living room of the items that collect dust. That would cut down on dusting, or at least the items that collect the dust. The game table must stay in the living room I like to play Pac-Man; therefore, the table stays. I am moving all my sewing things to the basement while I wait for the cottage to evolve. The Christmas tree will go into the small living room that just collects dust and cast offs anyway. The old oak dropleaf table is going to the attic and the old blue sofa is also. The only thing staying with the tree will be the piano. It is too heavy to move again, and the kids voted for it to stay. I will likely not get much moved today. The morning is off to a slow start with cleaning. My list is missing... most
Post a Comment
Read more 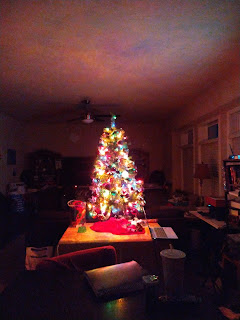 Today we find the table. Yes, you read that correctly, we have laundry to sort for what doesn't fit and needs to go to a new home or be recycled. This is part of our get ready for the holiday decorating plan. If I empty the closets of what is not needed, then other things can go into that area and make room for oh, maybe the tree? My desk that is currently in the living room will move to a new location. Yesterday I spent a good deal of time sorting papers, and I was able to rid myself of quite a few. I have a few ideas but my "break from school" duties get in the way of progress. I think I will look into buying a fake fireplace. Just a thought. In the youngest child's room, I need to still hang the stuffed animal net. There is not much we can do with the older child's room it is so very small. Even if I were to try and make room there are far too many breaks in the wall space. The closet is in the center of one wall, windows take up 2/3 of the outside wall and th
Post a Comment
Read more 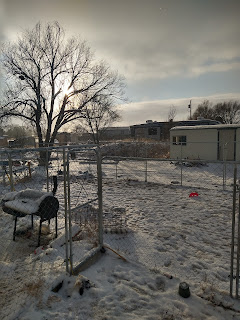 We have received our free sample of Winter and politely request that you cancel our subscription to the rest of this year's season. so pretty twinkling in the setting sun...and too cold!  It is decidedly cold this morning and I still haven't bought a winter coat. I know I will eventually buy one, just not sure when. I looked for a sweatshirt to improvise, but that turned up nothing. My daughter called and she decided that the littlest isn't quite ready to come over yet. That leaves me time to go get a coat... as soon as DH returns from his adventures. Well, that was yesterday, and I did go get a coat. I also took the time to get a different charger cord and some ink for one of the printers. After church I intend to get some things done for thanksgiving and hopefully make plans for the winter break travel. I am thinking Christmas on the coast. Just not sure which coast. I would like it to be a warmer coast, that much I know. As we downsize on "stuff" we also have
Post a Comment
Read more

Five Below... not really 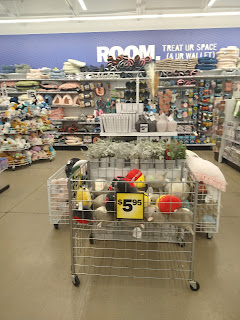 Good afternoon! I took the girls out to find a gift for their "nieces" for Christmas. We thought we would check out the store "Five Below" I had heard that the items there were $5 and below. Some were but I am thinking the name will change to Ten Below at some point. Plenty of items fell into the 5 and below range. They did have difficulty finding something the older niece would like in that range. I did not limit them in that way, but they did truly try to find something that could fit the mold. Both girls picked out slime for the older girl. One bought a bucket full and the other a smaller package with add-ins. This corner of the store started the upward price change I think the highest price that I did see was $10 I can't say we will visit that store again anytime soon. But it was interesting to see what they had. I did purchase some LED puck lights for the pantry closet. Also, a pair of elf slippers that need some jingle bells added to them for the youngest
Post a Comment
Read more 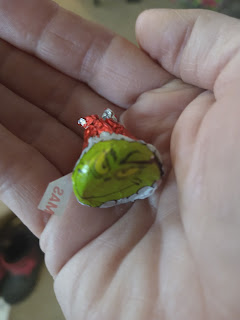 Have you ever heard the term "kangaroo court"? I think most older folks have. I received a phone call yesterday from an angry person demanding that I allow her to speak to one of my children. This person then insisted she knew we held a fake court session and pretended to adopt our kiddos. She gave me an ultimatum. I had until the end of the week to allow a phone call, or she would retain a lawyer, and everyone involved would go to jail. (It was Thursday) Now this might be a scary proposal in certain situations, in other situations this proposal of confinement, access to a library, meals served to you, ensuite... sort of, kind of like tiny house living! Okay all joking aside. This person is totally delusional. Court was real, there was a kangaroo there, but it was a TY stuffed toy, and it came home with us, a gift to the child who chose it, from the court. I was surprised to not get this call last week. Instead, it came a week after the final adoption. I have blocked her num
Post a Comment
Read more
More posts